Weinerschnitzel? No, Why do you Ask? 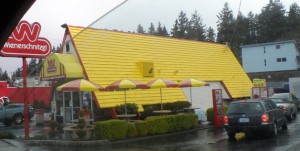 How about because your name is ‘Weinerschnitzel?’  The fact is the Weinerschnitzel fast-food restaurant chain has, as far as I can tell, never served weinerschnitzel. We’ll forgive them that. This fast-food chain is common in many parts of the country and people there are likely to find it strange that Linda and I would take a sixty mile odyssey to visit one. The fact is that there are only two of these restaurants remaining in the state, and this is one of the original restaurants, built in and largely unchanged since 1961.  The original banner declaring this to be ‘Der Weinerschnitzel’ has been replaced by the modern chain’s sign, but that’s the biggest cosmetic difference.

Linda grew up eating at the chain, and my family stopped in a time or two over the years, so when she suggested a trip down memory lane– or at least up to Everett, WA.– to visit for lunch I was on board. After a thirty mile freeway journey we found the restaurant quite busy, with a line at the drive-through.  They don’t appear to be in danger of going out of business anytime soon. 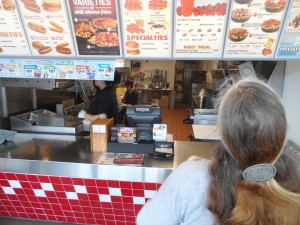 Inside the A-Frame building (sheathed in genuine big-bird yellow fiberglass faux shingles) only the extent of the menu and the drive-through attendant’s radio headset tip you off that you haven’t somehow been transported back in time. Well, that and the prices– which in fairness are fairly good by 2015 standards. Chili-cheese dogs cost us $1.99 each, and Chili-cheese fries added another $2.99 to the total.  I found it interesting that the ‘medium’ soft drinks were 50% larger than a ‘Large’ would have been in 1961. 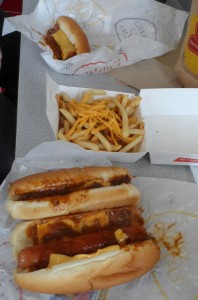 Seating is period- which is to say practically nonexistent.  Three chrome-and red vinyl stools flanked counters on either side and that was it.  So how was the food? Well, that’s a little different than 1961; not unrecognizable but different. For one thing signs advertised that the hot dogs were ‘100% Beef from Black Angus cattle.’ They didn’t specify about the ‘Chili.’ I put chili in quotes because this is not what the modern world means when it says Chili. This is more of a meat sauce than a stew. Tasty, but a whole bowl of it would be kind of weird.

After 54 years they have the proportions down pat; not quite enough chili that you can’t eat it by hand with a single slice of American cheese. I was originally disappointed by the quantity of chili and shredded cheddar provided with the fries, but I should have had faith; in the end it was just enough to get some in every bite without rendering the fries a soggy mess.

There were more exotic offerings on the menu- ‘The Junkyard Dog,’ a hot dog topped with chili-cheese fries and five varieties of fries embellished with bacon, hotter chili or ‘buffalo-style’ but we stuck with the childhood classics.

So how was it? Exactly what you’d expect. I mean we aren’t exactly talking about Haute Cuisine here. Simple, good quality old-fashioned fast food, unpretentious but satisfying. It was successful for us as a bit of nostalgia, but the brisk pace of business during our visit seems a solid indicator that time has not diminished its charms.  I won’t at all mind a thirty-mile drive to repeat the experience… in a year or so. I think it’s charms would rapidly pale if indulged in too often but as an occasional treat? Totally worth it.