The epic Foreworld Saga that spans continents and centuries begins with the Mongoliad trilogy, set in 13th century Europe. This sweeping work of alternate history follows a small band of warriors and mystics as they raise their swords to save Europe from a bloodthirsty Mongol invasion. They embark on a perilous journey and uncover the history of hidden knowledge and conflict among powerful secret societies that had been shaping world events for millennia.

The following stories are placed in this world 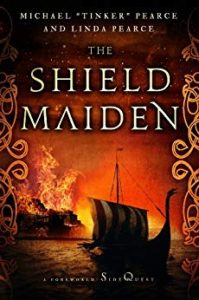 Sigrid is a Shield-Maiden who yearns to break free of the restrictions of her father’s home and join the Sworn Men in an actual raiding expedition. When a small diplomatic party that includes members of the Shield-Brethren lands at her family’s holding on Göttland, the party’s second in command, Halldor, sees in Sigrid a vision of beauty and power that might challenge — and even destroy — many men. And when bloody chaos ensues at a nearby Viking fishing village, Sigrid proves she has more than mere talent: she has Vor — the fate sight — an astonishing focus in fighting that sets her apart from nearly all who have ever lived and puts her in the rare company of the finest Shield-Brethren. But as Sigrid and her family confront her otherworldly ability, will it prove to be a gift to be celebrated, or an affliction to be cured? 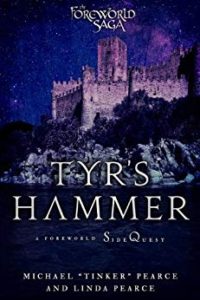 In this quick-witted and action-packed addition to The Foreworld Saga series, the leader of the Shield-Brethren has dispatched two of his men northward to secure land for a new citadel. When Tyr and his companion come upon the perfect spot, they discover that it is owned by Voldrun, a northern king with a questionable sense of justice. Although he welcomes the travelers, the king’s true motives eventually become clear. Determined to be compensated for his hospitality, Voldrun subjects the duo to several challenges, culminating in a game more dangerous than either warrior could ever have imagined. Steadfast and brave to the end, Tyr must draw upon all of his considerable skill and cunning as he endeavors to outwit the sly Voldrun and strives to secure a bright future for the order. 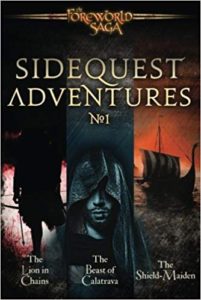 Three exciting stand-alone SideQuest adventures set in the alternate history world of the popular Foreworld Saga, collected in a single volume.The Beast of Calatrava, by Mark Teppo, is an intriguing alternate history tale in which both a battle-scarred former knight with a blood-soaked history and a monk with a mysterious past face the encroaching Templar crusade and the war coming to Iberia.

In The Shield Maiden, by Michael “Tinker” Pearce and Linda Pearce, a headstrong and skilled young Viking woman struggles through the stigmas of her time to claim her spot among the fiercest of fighters.

The Lion in Chains, by Angus Trim and Mark Teppo, is a visionary adventure in which the legendary Robin Hood joins forces with a clandestine order of warrior monks to rescue the kidnapped King Richard the Lionheart.