Diaries of a Dwarven Rifleman

Book 1 of The Dwarven Rifleman Series

Engvyr’s father gave up on the miner’s life to move the family back to their ancestral home in the far north. But the journey is fraught with perils the young dwarf has never imagined, and when tragedy casts him in the role of hero, well, what’s a dwarf to do?

The events of that fateful journey have shaped and ruled his life, but now Engvyr wants nothing more than to make a place for himself, perhaps settle down and raise a family. But when a new enemy rises in the North he finds himself at the center of the conflict, with not merely the freedom of his people but the fate of all of humanity hanging in the balance… and the habit of heroism is a hard one to break.

In Diaries of a Dwarven Rifleman magic, science and technology work hand-in-hand to create a new kind of fantasy world, where the character, life and relationships of an ordinary dwarf can steer the course of history and save a world.

Lord of the North

Book 2 of The Dwarven Rifleman Series 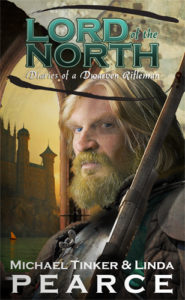 The sequel to ‘Diaries of a Dwarven Rifleman-

The Baasgarta’s capitol has fallen but the war is far from over. Tens of thousands of enslaved dwarves remain in the north waiting to be liberated. Meanwhile Engvyr must come to grips with his new title and job, not the least of which is figuring out what exactly that job entails. It’s all very well to be named the Lord Warden of the North, but no one seems to know exactly what he is supposed to be doing.

Meanwhile in the nearby human-controlled port city-state of Taerneal something is going on- something involving the Dwarves. But the City Council is resistant, and there is more afoot than it appears. Before long Engvyr must intervene directly, though it means he could potentially find himself facing a war on two fronts. Add to this the dwarven regiments are having their own issues, chief among them trying to figure out where the Baasgarta have gone…

It’s a mess all around, but one thing is becoming increasingly clear… whatever is going on it’s worse than they think. 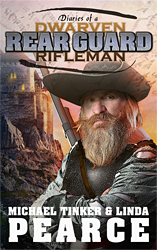 Engvyr Gunnarson is a marksman in one of the dwarves elite rifle regiments. He is sworn to serve king and country, but when a rescue mission goes awry he and his companions must fight against impossible odds to delay their pursuers. Will even his skill be enough? Even it if is his mission may require the ultimate sacrifice…
Set in the world of ‘Diaries of a Dwarven Rifleman.’ (novella) 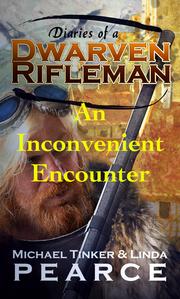 A short story of Engvyr Gunnarson, dwarven rifleman.
A young Engvyr was just looking to sell his furs and get a good nights sleep. But fate has another plan when he meets up with a man from his past.