Space Cruisers- Let’s do This Thing 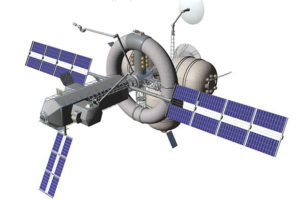 We need interplanetary cruisers. Not single-use, purpose-built and mission focussed craft. True interplanetary spacecraft. Spacecraft that can change their mind about their course, destination and mission parameters. Spacecraft that can, in a reasonable timeframe, go to the rescue of other craft or missions. Ships that can refuel, resupply, perhaps change crews and head right back out to the next thing.
The technical challenges are daunting, of course. The biggest challenge is not technology; a ‘space cruiser’ (the Nautilus concept) that would use entirely existing and off-the-shelf technology was designed years ago. The biggest challenge may be people rather than technology. Space is an unforgiving bitch that will kill you in an instant the first chance it gets. Humans, even the best of us, are pretty good at giving things a chance to kill us. Another thing is that long-term exposure to microgravity is not good for humans. It creates all manner of health issues like bone-density loss, muscular degeneration and other things. We can rotate the spacecraft to produce a suitably gravity-like conditions of course, but this introduces technical complications that add to the difficulty and expense of designing such a spacecraft. These were addressed in previous design studies, and frankly the engineering issues are solvable. But the human issues?
We have submarine crews that spend months at a time isolated in cramped. confined quarters and while it takes a certain psychology to endure this we have no shortage of people capable of it. But the difference between a submarine and a spacecraft is that in an underseas vessel the possibility of escaping to a habitable environment exists. There is no such option for a ship in deep space. How will this effect the crew of such a vessel in the long term. especially when we are contemplating missions that can stretch to years? How will the stress of living in a fragile, confined space in an extremely hostile environment affect people long-term? We simply don’t know. This is part of why we need a fleet of such ships- the reasonable prospect that you could be rescued might greatly reduce this stress.
The need for true interplanetary spacecraft becomes even more crucial in the light of SpaceX’s plans to establish a permanent Martian colony. It might be a long shot, but betting against Elon Musk to accomplish his dreams is not a risk I would take- his track record is pretty good so far. Having a fleet of interplanetary cruisers would enormously increase the odds of survival for such a colony. Emergency supplies, medical relief- even law-enforcement issues could be simplified.
Such vehicles also have uses other than exploration and colony support- mining near-Earth asteroids would become a real possibility. Of course the financial viability of such activity remains to be established but having a source of materials that does not impact Earth’s environment would be a boon, and having a source of raw materials that doesn’t have to be boosted into space to be used there would be extremely useful.
Of course a current-tech interplanetary cruiser would not be fast- but with the proposed modular construction drive systems could be upgraded relatively simply as the technology improves. Which it will of course. If the potential of the EM-Drive or Mann-effect thrusters works out the solar system could be our oyster.
Life on this planet has all of it’s eggs in one basket as it were- for the first time ever we have the chance and the capability to change that. Becoming a multi-planet species will dramatically increase our odds for long-term survival. Plus it would be seriously, undeniably cool. That’s gotta be worth something…