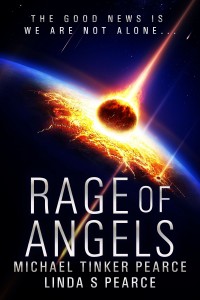 Last week we ran a Bookbub international promotion for our Military/Hard-Science Fiction novel ‘Rage of Angels.’ As a result the book hit #1 bestselling Hard Science/Science Fiction on Amazon in the UK, Canada and Australia! Hopefully upcoming promotions in the US will have a similar effect.

I’m proud of this book, and frankly have always thought it sort of fell by the wayside. We never promoted it previously; life got in the way. Little things like our house being severely damaged by a fire… I’m pleased as hell to see it doing well now, and am currently working on a sequel novella and the next book in the series. Better late than never, I suppose.

Linda is co-authoring a contemporary fantasy with a friend with the working title ‘City of Gray.’ Sam is a young woman with the extraordinary ability to see the past. When she moves to Seattle, however, the past she sees is a history of murder- and worse yet a modern serial killer seems intent on recreating murders from the time of the Alaskan Gold Rush! I’ve read the first four chapters, and I think it’s terrific.

The sequel to ‘Diaries of a Dwarven Rifleman,’ ‘Lord of the North’ should have it’s much-belated release this autumn; cover art is in place and much of the editing is done. We just need to finish the damned thing…

After a protracted period of stasis we’re finally firmly moving forward. It’s been a difficult couple of years and health and financial issues have slowed things down but now it’s onward and upward.