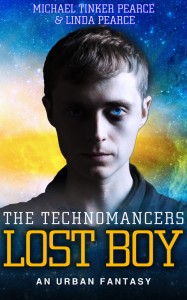 Hi All,
Linda here. We are really excited to be putting out our new Urban Fantasy short story ‘The Technomancers: Lost Boy.’ It was an idea that was stewing for a while now and when we wrote it we were writing alongside all the other projects we have going. Busy Busy!

This was my first foray into writing the base of the story with Mike rounding it out. I hope that you enjoy it!

Here is an excerpt from it:

“So you are, what, trying to recruit me for your company?  Is that why you said I was ‘one of you?’”

“Yes and no,” Sid said, frowning. “After we get things sorted out you might decide that you want to work for us, but you aren’t obligated to do so. But that’s not why I said that.  We share a very special, unusual talent.”

JC was extremely skeptical, but he tried to keep it out of his expression. Now we get down to it, he thought. The sales pitch.  I wonder what he really wants?

“Look, you may find this hard to believe at first,” Sid began, “But there have always been people that saw or sensed things in the world that others couldn’t. Some of them could affect the world around them with their thoughts, their will. As technology advanced some of us found that we could affect computers and electronics.  We call ourselves Technomancers.”

It was JC’s turn to frown now. This wasn’t what he had expected. “What, like magic?  Pull the other one.  I haven’t believed in that crap since I was little.”

Sid smiled and said, “Fortunately your belief is not required for it to work.  You haven’t wondered how you can sense where weaknesses in security might be?  How you can find back-doors in the code so easily?  Do you think everyone can feel the flow of data on the web?”

JC was startled by this but tried to hide the reaction. “Every good hacker does that.”

“No, they don’t. They also don’t have invisible friends like Dravel helping them, or telling people who can help when they’re in trouble.”

If JC had been startled before he was shocked now. “How the hell do you know about Dravel?  I’ve never told anyone about him!”